Seat Belt at the backseat “ties” us with life !

The biggest mistake that occurs both in our country Greece and at European level is the fact that driving is treated as an easy, simple and safe everyday habit, resulting from the conviction of the modern driver that a car accident isn’t going to happen to himself/herself. It’s statistically proven that we will be part of at least one serious car accident in our lives, due to either our own fault or to someone else’s. Therefore, it must be clear that driving is one of our most dangerous daily activities, in order for us to understand that the compliance with the traffic rules is a basic prerequisite for our safe transportation and even our survival, as well as the survival of our fellow humans.

Fortunately, over the years, it’ s not at all accidental that the use of the seat belt has rooted in most drivers’ minds. However, unfortunately, it’s seen that the safety belts’ use is increased by the front occupants only, mainly in the interurban road network and reduced in the interior of the cities, in 88% vs 72% respectively. The percentage of the seat belt’s use by the occupants of the rear seats is declared and it doesn’t exceed the 19%, in other words about one in five occupants of the rear seats use their seat belt. Rates are equally disheartening at European level, as, according to a recent study carried out in Europe, one in three passengers in the backseat do not wear their seat belt.

What should concern us is the reason why the rear seats’ passengers neglect to wear their seat belt. The main cause is the lack of education, humanity and driving culture. Not only is the ignorance of the fundamental driving knowledge that kill us, namely driving illiteracy, but also the denial to comply with each time legislation. Personally, I can’t believe that the occupants of the rear seats don’t realize that in these seats too the use of seat belt is mandatory, because as it’s commonly known safety belts don’t function as decorative accessories, but as a precautionary measure. As a consequence, the false belief of the passengers in the rear seats that these are safer seats than the front ones is strengthened by the impunity of this offense.

Try think with our common sense why the rear seats’ occupants must also wear their seat belts. Imagine what will happen in case of a frontal collision … the rear passenger who doesn’t wear his seat belt will be “thrown” almost at the speed of the vehicle and he/she will be land on his/her front passenger, multiplying the chances of creating a push capable of a very serious injury or even worse causing an instantly fatal accident. Another possible version is the launch of the rear passenger, who doesn’t wear his/her seat belt which would act as an obstacle barrier, outside the vehicle from either the windshield or the windows, depending on the way of collision. To understand that better, let’s take as an example a vehicle moving at 50km/h and a passenger sitting in one of the rear seats who doesn’t wear a seat belt and weighs 70kg. To calculate the push with which this passenger will land on his/her front passenger, we must take into account the fundamental rules of physics. Based on the theory of push, the push of a body consists of the product of the mass of the body at its speed. Therefore, in the above-mentioned case of the frontal collision, the passenger will fall on his/her front passenger with a weight of 50km/h x 70kg = 3500 kg, a weight equal to that of an elephant.

From what it’s foretold, it’s crystal-clear that the ignorance concerning whether or not wearing a seat belt is a criminal action or better a criminal omission. To sum up, sitting on the front seats or at the back, we must respect human life and show it in practice by wearing our seat belt. How many hearts would they still hit if they wore their seat belts ? That’s the reason why we must take precautionary measures, as safety can’t wait ... !! 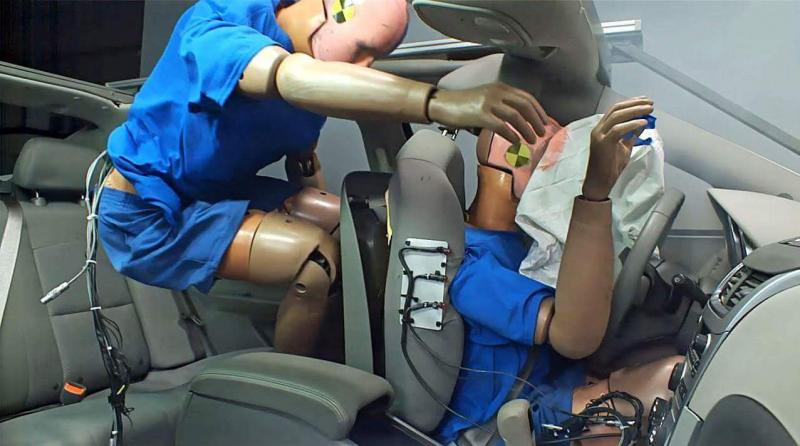