E-scooter app asks rider if they have been drinking

An e-scooter app that advises you not to ride if you have been drinking is helping tackle the number of drink-related accidents in Europe.

TIER Mobility has e-scooters available to hire in various cities across the Continent. In a number of places, including London, Paris, Oslo, Helsinki and Stockholm, the accompanying app will ask if you have been drinking and suggest an alternative form of transport if you have. This initiative was also shortlisted for our 2021 Excellence in Road Safety Awards, find out more here.

The company has partnered with local taxi companies, giving users a simple alternative to hiring an e-scooter for their journey on Thursdays to Saturdays between 9pm and 4am.

The same study found that alcohol consumption increased the risk of a TBI fivefold for an e-scooter rider compared to a sober user. E-scooter injury analysis in the US cities of Santa Monica and San Diego suggested a strong correlation between alcohol consumption and crash severity.

TIER e-scooters were developed with safety features to help minimise the risks to riders and the public, including prominent indicator lights, shock absorbers and a large front wheel for greater stability. They also have triple brakes and a double kickstand that give the scooters improved safe stopping-distances and stability.

Adding the drinking question to the app was an extension of their safety considerations.

A spokesman for TIER said: “Our 'anti-drink-riding' feature is active in key cities and aims to discourage riders from drinking and taking an e-scooter, instead providing them with an alternative mode of transport home. We are so committed to road safety that, through this feature, we are actively telling prospective customers not to take our service and re-directing them to a competing mode of transport.”

TIER carried out its own research on the psychological and pragmatic reasons why users may be tempted to hire an e-scooter after drinking and believes the feature on the app acts as a timely reminder to users to consider their options.

The company says it would strongly encourage other micro-mobility operators to adopt similar policies to help cut road accidents. 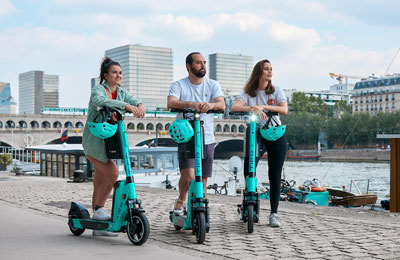