Aiming to inform, raise awareness and, most importantly, help drivers drop the risky habit of in-vehicle mobile phone use while driving, Road Safety Institute (R.S.I.) “Panos Mylonas” presented, on Monday, 21 March, the digital application DRIVE IN THE MOMENT during a Press Conference at Electra Palace Athens. The event was held within the framework of the 15th Panhellenic Road Safety Week (21-27 March), organised by R.S.I. “Panos Mylonas” and the Hellenic Institute of Transportation Engineers (H.I.T.E.).

DRIVE IN THE MOMENT was developed by the Australian Automobile Association (AAA), in collaboration with the New Zealand Automobile Association (NZAA) and the University of Queensland, and is being promoted worldwide with the support of the FIA as a good practice. As a FIA Club Member, R.S.I. “Panos Mylonas” was chosen by the International Automobile Federation (FIA) to translate and localize the application in Greek and promote it in Greece and Cyprus. DRIVE IN THE MOMENT is based on Planned Behaviour theory and consists of two parts: a quiz prompting users to rank the relative risk of various driving behaviours against the opinions of road safety experts to help them understand the crash risk (risk rater) and a tool helping young drivers build a personalised plan to reduce their smartphone use by training their mind to better respond every time they feel the urge to do so (plan builder). DRIVE IN THE MOMENT will be framed by a specially designed educational programme for youth delivered at selected Universities, starting from the University of Patras. Also, info kiosks displaying the application to enhance its visibility will be installed at universities and businesses, starting from The Mall Athens.

R.S.I. President Mrs Vasiliki Danelli-Mylona, at her opening speech, welcomed and thanked honorable guests for attending and proceeded to announce the action plan for the 15th Panhellenic Road Safety Week, organised in collaboration with H.I.T.E. since 2008. Mrs Mylona stated:
"On the occasion of the European Year of Youth 2022, we dedicate this year’s Panhellenic Road Safety Week to young people, the age group suffering the most from road traffic crashes. She also stressed: Greece, together with Finland and Serbia, rank first in in-vehicle mobile phone use, although drivers claim to know the risks. And for this reason, the Institute has been chosen, after strict evaluation by the FIA, to translate and localize the DTIVE IN THE MOMENT application and present it to Greek-speaking audiences, with the support of FIA".

The Minister of Infrastructure and Transport Mr. Konstantinos Karamanlis attended the event and, during his speech, congratulated the R.S.I. and its President’s work, emphasizing on the close collaboration between the Ministry and R.S.I., as well as on the contribution of H.I.T.E. After having referred to the recent achievement of Greece ranking first in EU in reducing road traffic injuries and fatalities during the past decade, he stated:
This is a national success which all -and first of all the Greek drivers- have contributed to. But is that enough? Absolutely not. He added: For the Government, Road Safety has been set from the very beginning as an absolute priority and a national goal and the country’s driving behaviour must be further improved. That is why we welcomed the DRIVE IN THE MOMENT, an application aiming to raise awareness, especially among young people, on the serious issue of in-vehicle mobile phone use and distractions".

MEP Elena Kountoura, rapporteur of the European Parliament on the Report-Resolution on the EU Road Safety Policy Framework until 2030, stated: Changing behaviour toward ending in-vehicle mobile phone use and driver distraction will save lives. And raising awareness through initiatives like DRIVE IN THE MOMENT can significantly contribute to that. Road Safety concerns us all, it concerns our everyday life, our family, our people, and it must always be high on the priorities of the national and EU agenda.

Mr. Luca Pascotto, Head of Road Safety & Global Advocacy of the FIA, who traveled to Greece to personally attend the official launching, stated:
It is a great pleasure that the FIA programmes are highly appreciated by active Organisations like the R.S.I. “Panos Mylonas” which we trust with their promotion. Non-Governmental Organizations play a significant role in carrying out such programmes, and the Institute, being such an Organisation, meets the strict evaluation criteria the FIA sets for the assignment and implementation of those programmes. And for that, we are happy to offer our support. Aim of the FIA for the next decade is to shape a holistic Road Traffic Safety culture, also through programmes like the DRINE IN THE MOMENT which promotes Road Safety and Mobility.

Head of Order of the Hellenic Police, General Eleftherios Gkarillas referred to the role of enforcement and Traffic Police in monitoring mobile phone use while driving. The Vice Governor for Transport and Communications of the Region of Attica, Mr. Vasilis Giannakopoulos announced an upcoming collaboration with R.S.I. for the implementation of educational programmes for Secondary school students, the most vulnerable age group. The President of H.I.T.E. Mr Panagiotis Papantoniou made a presentation on “Youth, Road Safety and Distracted Driving” and, having observed data from Greece and Europe, reached useful conclusions: Road safety and distracted driving are interdisciplinary issues and the plan addressing them should be as such. Rapid reflexes are required from the State to adapt and be able to incorporate technological changes and international experience. The National Strategic Plan for Road Safety 2021-2030 is a very important tool to develop, review and monitor the required actions. R.S.I. team members Vasiliki Plemmenou and Vangelis Makris who manage the programme presented the Greek DRIVE IN THE MOMENT application which is accessible, for free, at www.driveinthemoment.org/gr 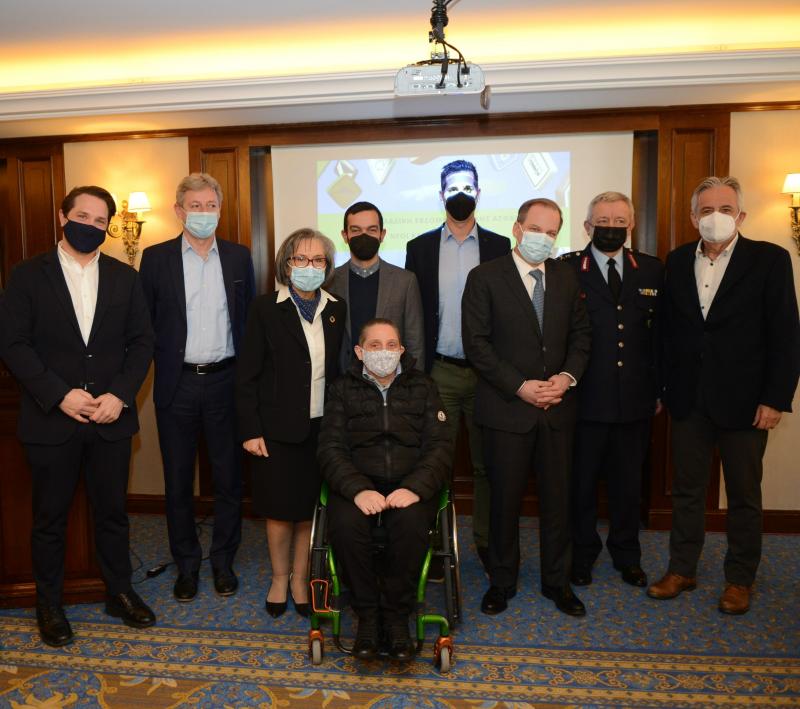