Encouraging data show that in Slovenia, the mortality rate due to alcohol-related traffic incidents in the group of young drivers between the ages of 18 and 24 has decreased by 60%, which shows that young people are on the right track. Such a positive result was encouraged by the VOZIM Institute to plan future activities.

Zavod VOZIM, Institute for Innovative Education with its initiative Heroes drive in pajamas works very consciously to encourage young people to change their attitude towards drunk driving and strive to be safe and responsible drivers.

Fourth season of Heroes drive in pajamas has put in the centre of its concern the fact that between years 2015 and 2019 the number of fatal alcohol-related traffic incidents among young drivers between ages 18 and 24 has lowered. The number of such incidents is in fact 60% lower, and this encouraged Zavod VOZIM to invite representatives of the age group responsible for this result – young people.

In 2020, young Slovenes, who became models of perseverance and determination for their peers as well as seniors, gave praise to their peers, aged between 18 and 24 years. The message of the initiative was spread by Tim Gajser, world champion in motocross, Jana Garnbret, currently best sports climber in the world in the categories of female, Blaž Janc, one of Slovene most successful handballers, Štefan Handalin, successful alpine skier, and singer Gaja Prestor, a big role model for many young people all over Slovenia.

Young ambassadors, participating in the initiative, gave praise to young people and everything they achieved in the field of traffic safety while also alert that they have not yet reached our goals and should keep their behavior in traffic responsible and safe.

“Amazing! We are doing great behind the wheel,” said Jana Garnbret and added, “I myself adhere to all traffic regulations and I am a safe participant in traffic. I would like to tell young people that it is no fun to be drunk behind the wheel because consequences can be very severe.”
Štefan Hadalin, who accepted the invitation gladly, explained why he joined the campaign Heroes drive in pajamas: “I think it’s crucial to raise awareness among people that alcohol and road don’t belong together. This is something I really believe and support. I want to advise young people to be responsible, towards themselves and others, and always behave accordingly with zero tolerance for alcohol.”

Although young people have made a massive progress, drunk driving remains main cause for one third of all road incidents fatalities. In 2019, 33 people have lost their lives on Slovene roads due to alcohol, and the situation will not be much better this year, despite all epidemic restrictions.

Vesna Marinko, representative of Directorate for Publich Health at Slovene Ministry of Health, says: “As said, young people have improved greatly in the field of responsible driving in the last years. This, sadly, means that now age group that poses a problem with regards to drunk driving is now represented by drivers between 25 and 54 years of age, so older youth and middle-aged people. Although numbers in these age groups vary heavily through years, we can’t yet confirm a positive trend of falling numbers of fatal traffic road incidents, as we did with younger population. “

Fourth season of "Heroes drive in pajamas" does not only give praise to young people but also alerts them of their responsibility. Young ambassadors who participated in the campaign, have thus encouraged young people, who are statistically speaking better drivers, to became role models and an example to all other drivers and to form an agreement with their parents and friends to always drive safely and responsibly.

Tim Gajser, who was excited to join the initiative, says: “My relationship to alcohol is such: I don’t consume it and I don’t support it while drinking. If my drunk friend would attempt to drive while drunk, I would definitely not allow it. I would drive them home myself or call them a taxi or get someone else to drive him home.”

David Razboršek, CEO of Zavod VOZIM, states: “When it comes to drunk driving, the improvement among young people shows their growing responsibility for themselves and for their close family and friends. Good job youngsters, keep up the good work! But this certainly can’t be said for all other drivers, which is why the situation with drunk driving is still concerning. For a significant step forward, we must first ensure an integrated approach of all responsible for traffic safety. 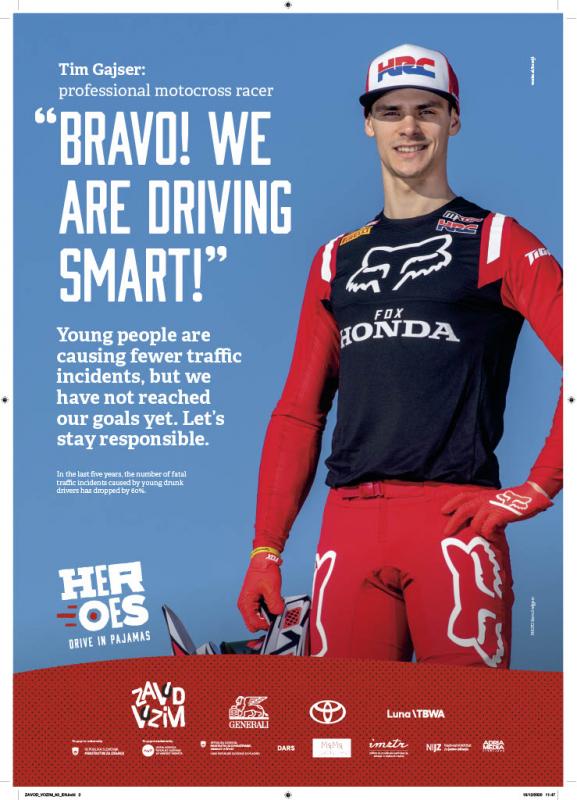