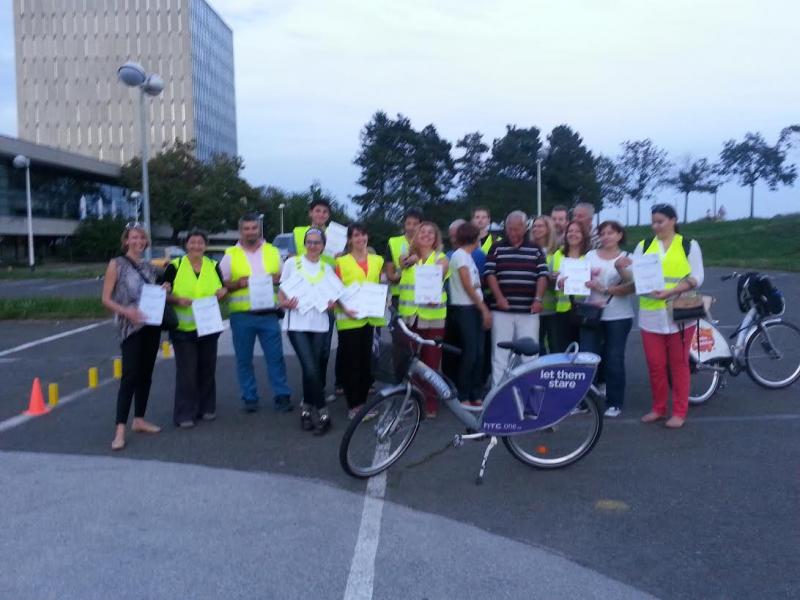 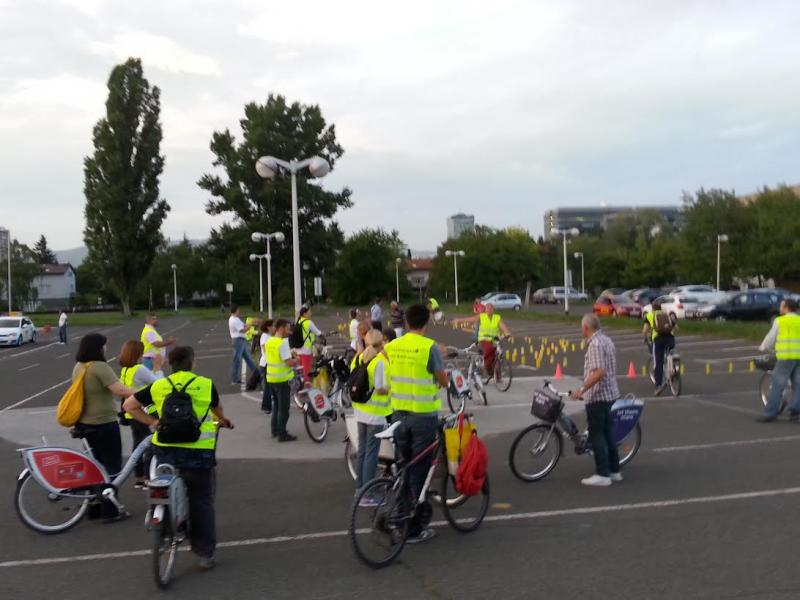 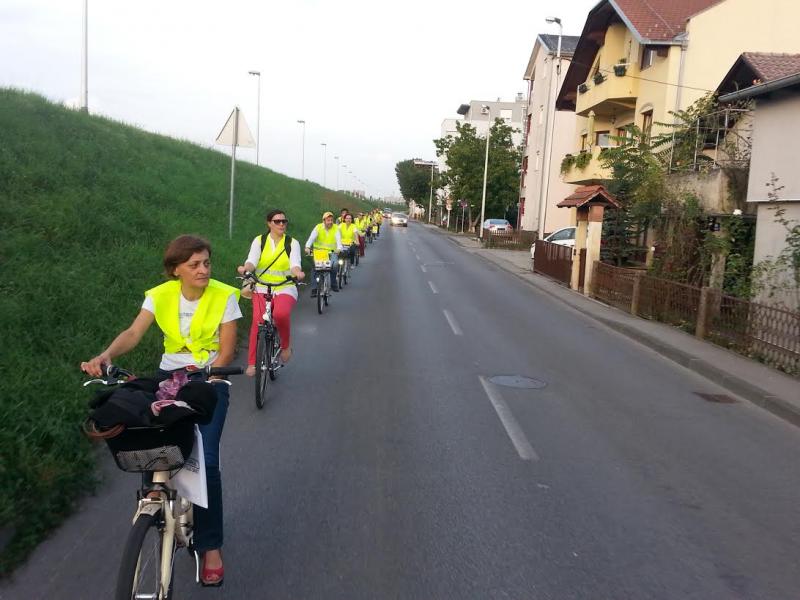 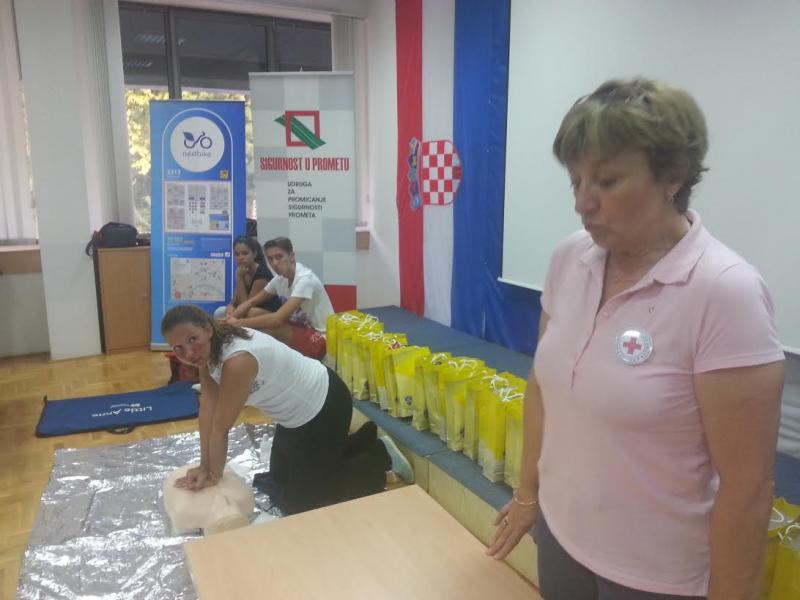 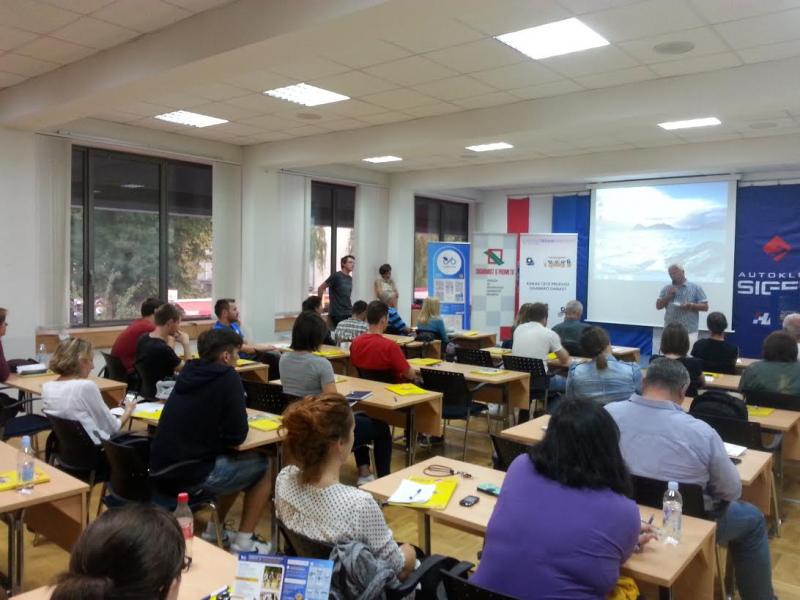 Starting from the fact that cyclists in Croatia and the European Union,are very vulnerable and high-risk group of traffic participants, our Association Safety in Traffic together with partners associations "My bike," Automobile Club "Siget", the Red Cross of the City of Zagreb, Ministry of Internal Affairs (directorate), Nextbike - system of public bicycles and Zagreb Brewery in cooperation with the City of Zagreb, on the occasion of the European Mobility Week September 14th and 15th has successfully implemented the project of education of adult cyclists for safe participation in traffic called "School of cycling 18+".This is a second part of the this year education campaing of the Association Safety in Traffic, first part has been a workshop held 19. - 22.nd of May leaning on the European Sustainable Eenergy Week as the tool for promoting sustainable mobility of the citizens in urban areas.First three day workshop had attended about twenty participants and it had been conducted with partners association "Moj bicikl" , Ministry of internal affair, Faculty of traffic from Zagreb and Nextbike Zagreb public bicycle scheme provider. Second workshop has been conducted as modular, two-day training school, which was conducted in the premises of AK Siget and the safe driving polygon in front of Ministry of Traffic. The participants had been teached in teoritecal module about of the scope and consequences of the fatalities of cyclists in Croatia and EU, a references to the Law on Road Traffic Safety for cyclists, secure way of participation in city traffic, the basics of providing first medical assistance and other questions that has been raised during the discussions. Participants had also been informed about the benefits of using the public bicycles system and proper selection, purchase and maintenance of bikes. We had conducted pre-workshop test regarding knowledge of traffic regulations and general information about bycicle traffic. About thirty cyclists attended this second workshop, who had at the end of training expressed a high degree of satisfaction in the anonymous questionnaire that had been provided. On the second day after the practical training of driving skills at the training ground participants were presented the Certificate of Attendance "School 18 plus" and practical gifts (reflective vest and tie, rear reflective light, cap, T-shirt ETM, a NEXTBIKE annual card for free use of public bicycles, Manual for cyclists issued by Association safety in Traffic and First Aid Manual issued by Croatian Red Cross). We are very proud of the inclusion of new partners in the preventive-security project Auto Club Siget and Zagreb Brewery, which is a company that promotes socially responsible behavior supported the project SCHOOLS cycling 18+ ". And the support of the City of Zagreb, which had recognized the importance of the project for the realization of the main goals of the European Week mobility (Select = > Change => Combine) it included in its program of European Mobillty Week and it had become official EMW activitie in Zagreb.