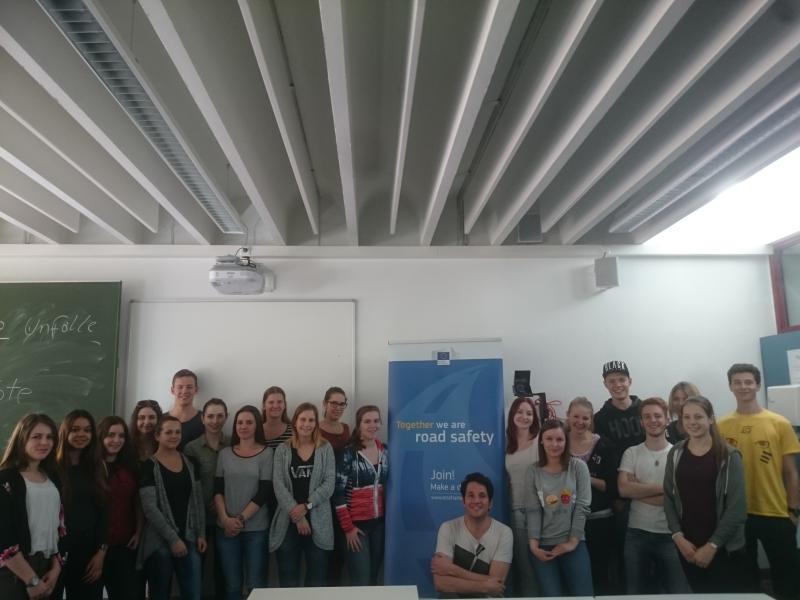 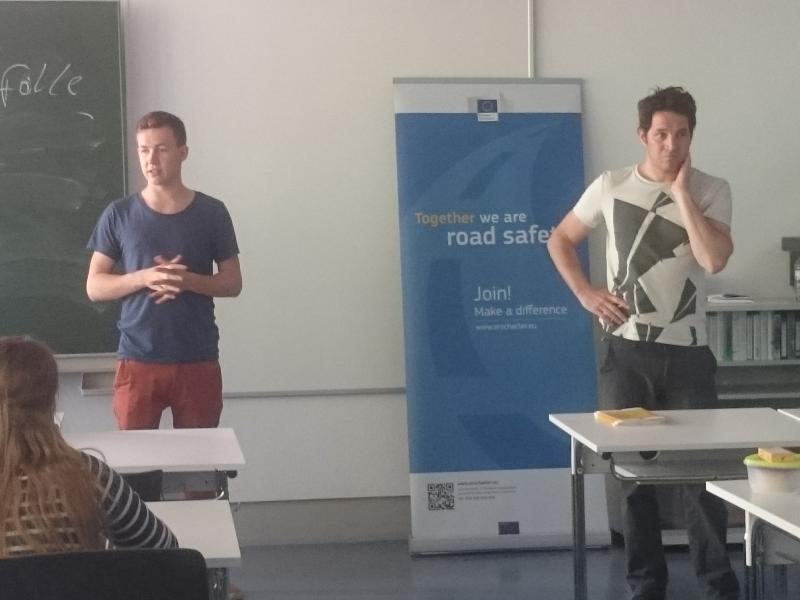 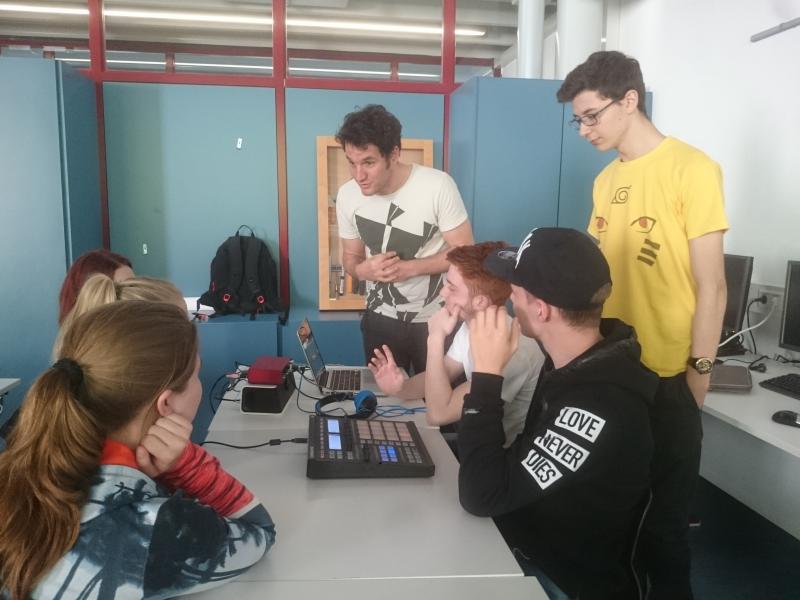 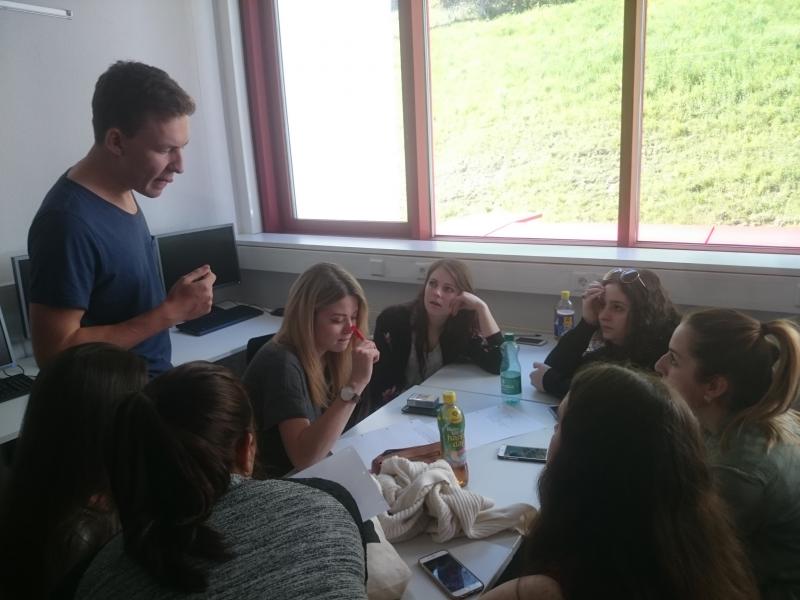 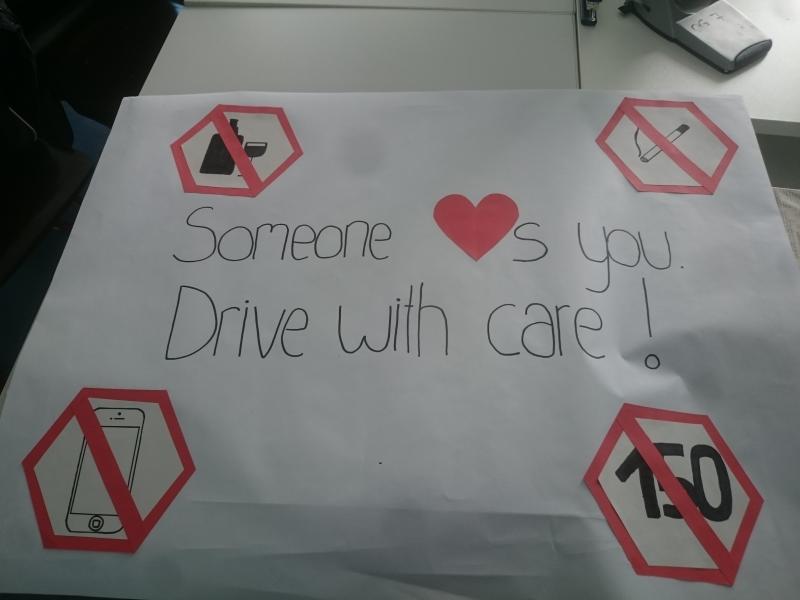 On 12 April, the European Charter participated in a creative music workshop on road safety organized by the Austrian Charter member FGM-AMOR for VET students aged 17-23 years at the Landesberufsschule Feldkirch.
Matthias Scheid from FGM-AMOR animated together with 21-year old Paul animated the workshop which is one of a series of 50 organized throughout Austria within the European Road Safety Tunes projects. Members of this EU- and national funded project (EU DG Move, Österreichischer Verkehrssicherheitsfond/BMVIT) have developed an awareness-raising methodology that incorporates social-art, peer-education, emotion and social media. The EU Road Safety Tunes is currently implemented in eight EU Member states (Austria, Belgium, Czech Republic, Hungary, Poland, Slovenia, Spain, and The Netherlands).
The Charter was represented by Annett Räbel who presented its objectives to the students, especially underlying the new focus of the Charter: young people. In 2016, the EU Commission decided to motivate more primary and secondary schools to take action for road safety and focused the Annual Charter Awards 2016 on road safety initiatives in schools.
After this short insight into the history and objectives of the Charter, Annett gave the students new EU road safety statistics from 2015 to reflect on: in 2014 almost 25 700 people did not make it home and more than 200 000 people came home with life-changing, serious injuries. The EU road fatality rate was 51 dead per million inhabitants. The lowest road fatality rate is reported from Sweden, the Netherlands, the UK and Malta with less than 30 road deaths per million inhabitants. The highest road fatality rates are found in Lithuania, Bulgaria, Romania and Latvia with more than 90 dead per million inhabitants. The young people, between 15 and 24 years old, make up 17 % of all road fatalities.
Matthias and Paul gave more specific numbers from Austria. In 2014, over 37.957 accidents happened causing over 47.670 people injured and over 430 dead people (vs. over 2800 fatalities in 1970). They then started a discussion about what changed since 1970 where the numbers in Austria and Europe have been higher. Students underlined that rules for example in regards to alcohol consumption and safety belts changed and that cars became more secure and roads better. They also identified the main causes for road accidents of young drivers: 1. Unadjusted speed level, 2. Disregarding priority, 3. Distraction, 4. Overtaking and 5. Alcohol
The students aged 17-23 years then discussed their experiences of drink driving as driver or passengers as well as the strategies they deploy to not drink drive or to hinder a friend to do so. Girls especially underlined that they are afraid if a male friend drink drives or drives with really fast. Fortunately, this young generation finds security more attractive than risky behaviors, a success of road safety education within the last years in Austria.
The workshop continued with a discussion of the consequences of road accidents due to alcohol: dead or injured people, losing one’s driving license and having to cope with financial consequences (min. 30- 50.000€ in Austria for fines, an increased assurance fee, lawyer costs etc.). To better illustrate these and other consequences an impacting video of a young Austrian drink driver named Julian was shown. Julian caused an accident under the influence of alcohol in which one of his best friends died. The video was produced for the project “Close to”  linked to road safety targeting novice drivers in driving schools and military barracks with a focus on alcohol.
Within the practical part of the workshop, the students were encouraged to create a song for their peers delivering a road safety message. Therefore, students have been divided into three groups: a group for writing the songtext, a group creating the beat and the music as well as a group designing a poster. The activity was great fun for all participants and the results can be seen in the photos and even heard on soundcloud.  The song will be shared by the students with their peers in Austria through facebook, at local level thanks to driving schools and at EU level thanks to Austrian members of the European Youth Forum for Road Safety and the ERS Charter.